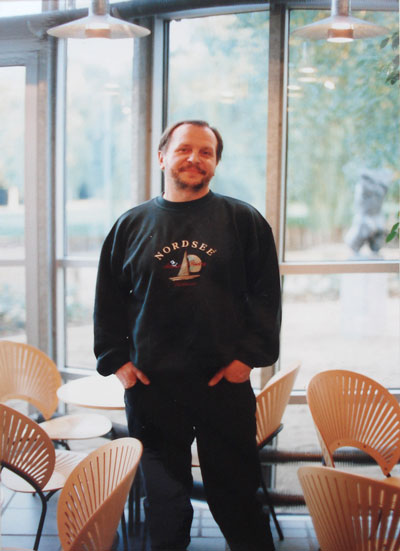 The icon…
It’s the incarnation of spirituality, veneration, approaching the divine; they are ancient mystery signs recognized by the initiated.

Eroticism…
It’s the beauty of the flesh that troubles the obscure forces of the body; it’s that perilous equilibrium on the edge of obscenity, a first step towards sin.

It is now close to 30 years that he has been cultivating the thematic models from Russian icons. His romantic themes of whale fishermen, pirates of the great north, are slowly built up using the typical narrative methods of icon artists. The main event is in the center of the icon surrounded by secondary events with the same characters in sections that icon artists refer to as “Kleimo”. Reichet also uses the ancient technique to built the support for the icon. 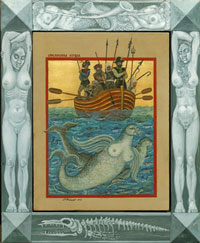 One of several boards assembled using a special technique such that they form a concave surface on which a fabric called pavloka is glued. The fabric is then coated with levkass, a mixture of chalk and sturgeon glue. After 20 to 30 coats of levkass, the surface is polished with a pumice stone to render it smooth enough for painting.

The gilding is created using gold leaf glued on the levkass and flattened with a fish tooth. The creation of the icon’s board is in itself a captivating work of art.
Even though Reichet has improved and simplified the creation of the boards, he often refers to them as levkass.
The pictorial technique used by P.R. is characterized by the polyphony of colors and the use of decorative elements. He uses an abundance of gold leafing and vivid colors typical of the traditional icons of Pskov and Novgorod. The artist’s love of the romanticism of the North Sea, maritime adventures and fantastic monsters from the abyss. But at the same time his work evokes the type of phantasmagorical creatures often found in medieval art.

Reichet’s symbolism is complex. There is what the artist wants to express, what he is really expressing in addition to what the viewer interprets in spite of him, in his erotic icons. “Everyone wants to see or represent the nude body, says the author, not everyone dares to do it freely. I do”.
Strangely, in his paintings, the sentiment of freedom and debauchery originates from the ocean creatures, fantastic fish and sea snakes and he nude women are all mysterious, awkward and dangerous looking. It is just another paradox that Peter leaves up to perspicuity of the spectator to discover.

Vera Tchernishova an art critic who often covers Peters art. She is a member of the Russian Artists association and has worked at the Hermitage. She currently consults with private art galleries in Florida, California and Berlin.